Homeless Sunday has been part of the Christian calendar for more than a quarter of a century. It is an opportunity for churches of all denominations and people of all faiths to unite and show solidarity with those experiencing homelessness and to reflect and plan practical action on homelessness.

The focus this year is ‘The impact of volunteering on the volunteer’, apt as Christians and church communities are at the forefront of the response to the rise in homelessness including the most visible aspect, rough sleeping. There were just 65 night shelters operating across the Housing Justice network in 2013, today there are 125 across England and Wales.

Last year the event was permanently switched to October, close to World Homeless Day. This was in response to feedback from church leaders and congregations and the growing number of churches involved in hosting Church and Community Night Shelter Projects. It was felt that as most shelter projects tend to open towards the end of October, the alignment allows the opening of the night shelter season to be marked in prayer.

Around 500 or more churches across the country usually take part, and it is hoped to grow that number this year.

“Please mark the date in your congregational calendars and consider how you can respond and plan and offer practical support for homelessness. We hope that more churches than ever before will join us this year to show solidarity with those who are experiencing life without a place to call home. As the faith community becomes more and more involved in the relief of homelessness, it is also fitting that we reflect about the impact volunteering has on the volunteer and air this subject and consider how those who work tirelessly to help can also be supported within the faith community.”

All forms of homelessness have increased by 4 per cent since 2017. There are around 320,000 families homeless in Britain. Roughly 36 households become homeless every day. The most recent government figures available (Jan – Mar 2018) are the first since the Homelessness Reduction Act changed the way data is collected from local authorities on statutory homelessness. In Wales the picture is mixed, but showing a general upward trend year on year for both homelessness and rough sleeping. In England rough sleeping has seen a 165 per cent increase since 2010.

Housing Justice carried out its own count of people bedding down in night shelters on the same night as the official count last winter. Piloted in London, we counted 509 individuals in Church and Community run night shelters. London had a rough sleeper count of 1283, 13% higher than last year, meaning without faith and community run projects, the rough sleeper count would have been 40% higher.

Updates about Homeless Sunday, and materials to support involvement, including activities for children, ideas for worship and for theological discussion will become available on the Housing Justice website in the coming months.

Housing Justice is a Body in Association of CTE 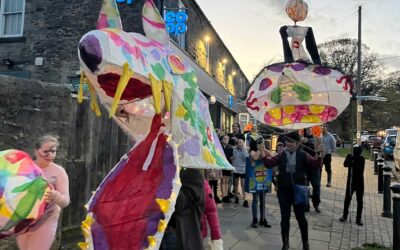 Our community team successfully delivered the October half-term plan to our families across Teesdale without a hitch. The staff, volunteers, children and parents pulled together and created 3 spookily large puppets and some scarily good pumpkins, which were then...

END_OF_DOCUMENT_TOKEN_TO_BE_REPLACED

Our popular Central Jarrow Detached Youth Project was successful in securing funds from the Violence Reduction Unit in a bid to create a short animated video on a subject they feel very passionate about…LGBTQ+. Many of the youth group’s participants identify as part...

END_OF_DOCUMENT_TOKEN_TO_BE_REPLACED

The Start of Our Free Winter Community Meals

Last Wednesday saw the success of our first Winter Community Meal of the year, with over 19 people in attendance enjoying a big bowl of chilli, followed by cake and custard. The meal was kindly sponsored by Jacqui, owner of Children of the Revolution in Tynemouth who...

END_OF_DOCUMENT_TOKEN_TO_BE_REPLACED

The 13 - 19th November is the World YWCA and World YMCA Week of Prayer. These sibling organisations, among other things, organise opportunities to unite their local associations around the world on important issues. In light of this week, Ian Pearson, shares a story...

END_OF_DOCUMENT_TOKEN_TO_BE_REPLACED

YMCA recently celebrated the opening of a redeveloped outdoor space for the young people who live under our roof in North Shields. What was previously an unused and unloved space has undergone a major transformation and is now a vibrant and welcoming outdoor area for...

END_OF_DOCUMENT_TOKEN_TO_BE_REPLACED

This website uses cookies to improve your experience while you navigate through the website. Out of these cookies, the cookies that are categorized as necessary are stored on your browser as they are essential for the working of basic functionalities of the website. We also use third-party cookies that help us analyze and understand how you use this website. These cookies will be stored in your browser only with your consent. You also have the option to opt-out of these cookies. But opting out of some of these cookies may have an effect on your browsing experience.
Necessary Always Enabled
Necessary cookies are absolutely essential for the website to function properly. This category only includes cookies that ensures basic functionalities and security features of the website. These cookies do not store any personal information.
Non-necessary
Any cookies that may not be particularly necessary for the website to function and is used specifically to collect user personal data via analytics, ads, other embedded contents are termed as non-necessary cookies. It is mandatory to procure user consent prior to running these cookies on your website.
SAVE & ACCEPT